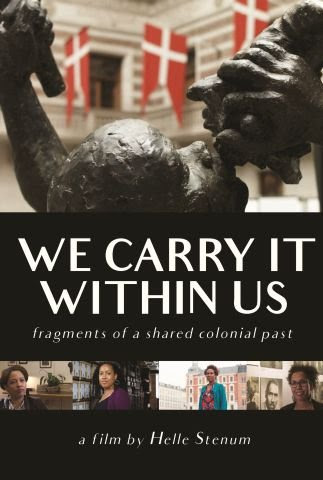 Join us at Bajo El Sol Gallery on Saturday, Feb. 3 at 4 p.m. for a screening of the documentary “We Carry It Within Us” with the filmmaker Helle Stenum.

This is Bajo El Sol’s first movie screening of 2018, and the first since hurricanes Irma and Maria.

Stenum is traveling to the V.I. from Denmark to screen the film, which investigates collective memory and different perspectives on the shared colonial past between Denmark and US Virgin Islands. The film was released in 2017, the centennial year of the islands’ transfer from Denmark to the United States.

‘The great force of history comes from the fact that we carry it within us, are unconsciously controlled by it…… History is literally present in all that we do.’
– James Baldwin

The colonial history of the U.S. Virgin Islands (formerly the Danish West Indies), and the history of slavery and the transatlantic slave trade, are often told in Denmark from a Danish perspective: ‘Danes telling the narrative about and for (primarily) other Danes’.

In “We Carry It Within Us,” the legacy of slavery, the memory of the Danish presence, the sale of St. Thomas, St. John and St. Croix, and the relationship of the islands to the U.S., are told through interviews conducted on St. Croix, in New York and in Copenhagen.

The film aims to investigate colonial histories as told through the memories, experiences and reflections of four Virgin Islanders (an artist, a student, a writer and an anthropologist) as they engage art and cultural historians in Denmark. In this way it seeks to illuminate how the colonial history is leaving its mark on today’s media, art, museums, education and wealth distribution, as well as in various ways of comemorating and forgetting.

Helle Stenum PhD, is a researcher and educator who has for many years worked on issues including migration, culture, collective memory, ethnic relations, transnational connections, and race and gender constructs at Danish universities and as an independent researcher and consultant.