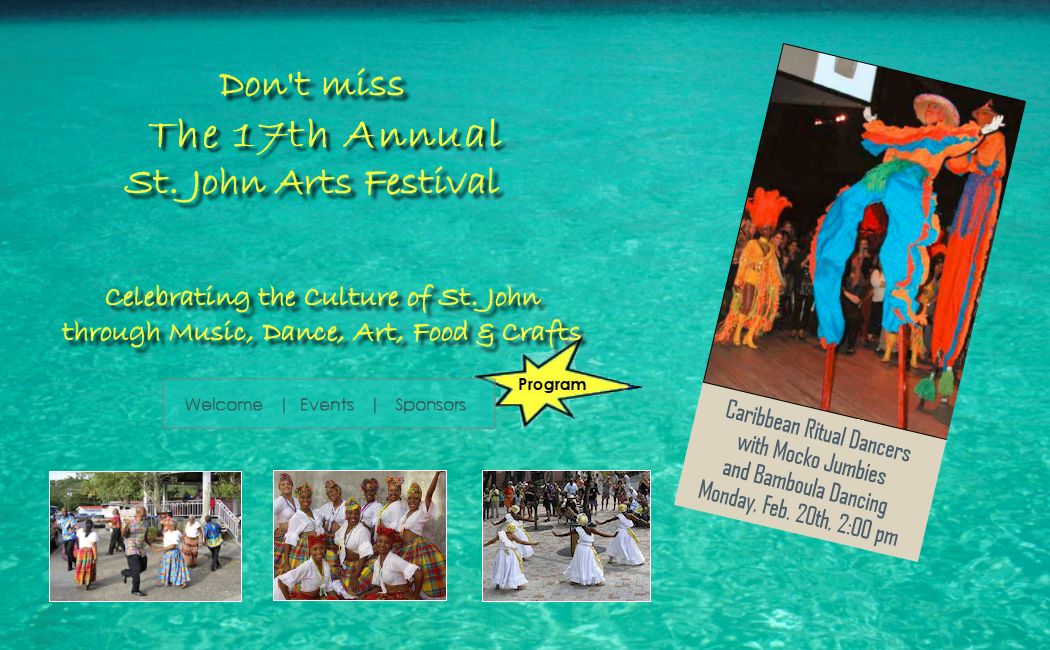 Believe it or not, the St. John Arts Festival is seventeen years old this coming February, bringing to the fore the history , tradition and culture of the indigenous people of St. John in its many forms, including music, dance, arts and crafts, thanks to the continued support of Virgin Islands Council on the Arts, the USVI Department of Tourism and our many other sponsors.

There has been no better place to show both visitors and residents alike what the culture and tradition of St. Johnians is all about than the “little park” straight off the ferry terminal, forming the first impression that newcomers experience – leaving no doubt that they have “arrived in the Caribbean,” with all of its color and warmth – as advertised.

This year’s Festival program retains the successful format of previous years, starting with a Children’s Day on Saturday, February 18th, when all the energy and exuberance of youth is displayed – including in traditional steel pan band music, school choirs, age old Quadrille dancing and lively jump rope performances which demonstrate superb skill, timing and coordination – without being tied up in knots. There is also a Children’s Art Show in the Park on Saturday.

Sunday, February 19th, is a lazy day in the shade of the huge mahogany trees, and church choirs echo the song of islanders in an uplifting Gospel concert, followed by colorful Quadrille dancing with its’ romantic links to days gone by.

Monday, February 20th – President’s Day – is the highlight of the five-day event, commencing with singing and rhythms going back to the roots of islanders, transitioning from solo dances to the music of the island’s number one traditional “scratch band,” originating with hand-made instruments and jaunty songs, as a prelude to a fantastic show of fifteen or so richly colorful dancers and children dressed up as ‘moko jumbies’ and reviving old dances such as the Bamboula from way back in the past.

Tuesday February 21st reaches out to the music and dance from the neighboring Caribbean islands, plus a unique film on traditional sailboat building in the Grenadines, and on Wednesday February 22nd, we round-off with reggae music, traditionally from Jamaica.

Throughout the Festival, adding to and completing the exclusively Caribbean atmosphere in the park is the ongoing exhibition of hand-made Caribbean arts and crafts, plus food and local-grown fruits and vegetables, with the exhibitors in colorful Caribbean traditional dress.

It’s a little jewel of a show – uniquely St. John! Visitors can’t miss it as they depart the ferry, and they will be left with the memory of the colorful traditions and culture of the people of this island.