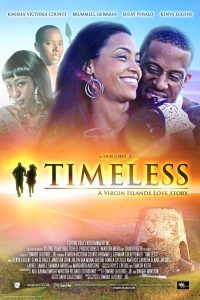 Timeless is the story of Ajuwa, a young Ghanaian warrior, who loses her soulmate to the slave trade long ago. Their souls reunite in the present in the form of Malinda Benjamin, a Senator in the U.S. Virgin Islands and Alphonse Walcott, a gifted writer who has returned home from New York. The kindling of the relationship goes sour when Alphonse meets Bianca, an illegal immigrant from the Dominican Republic, sent to work in a seedy brothel in St.Thomas and falls in love with her instantly.