The scene is now a common one on St. John. A dozen people are poring over phones and laptops in the public space at the third floor of the Marketplace.   A woman calls out to a stranger at another table.  “Are you getting Wi-Fi?” she asks.

“Yes, but it’s a little slow today,” comes the response.

Slow or not, the public free Wi-Fi system has been a lifeline for many on St. John who don’t have access to private networks belonging to businesses and recovery agencies.

After Hurricane Irma hit on September 6, ordinary communications came to a halt: there was no landline phone service, no internet access, no TV, not even a functional postal system.  A trickle of cell phone service was available in only a few spots.

Daryl Wade, an engineer with deep roots on St. John, set about finding a solution.   Wade is a vice president of the Virgin Islands Next Generation Network which supplies bandwidth to internet service providers.

Wade wasn’t on St. John when the storm hit, but within two days he managed to hop a boat carrying relief supplies to St. John and started rounding up allies.  He tapped several men with established information technology businesses: Jason Monigold of Computer Express, Matt Gyuraki of Love IT, and Morgan Barlas.

They immediately dropped any notion of competition and went to work establishing a system of Wi-Fi hotspots, making it possible for people to call home, book a plane flight, and post news on Facebook.  Initially known as the VINGN Free Public Network, the network is now called DIRT Free. It’s named for the NGO that is coordinating funding for the project, Global Disaster Initial Response Group (DIRT.)

The signal at the four DIRT Free Wi-Fi hotspots in Cruz Bay is sometimes blazingly fast, but other times it’s glacially slow. The reasons for its uneven performance vary: a generator supporting the electronics runs out of fuel; a rain squall blots out the transmission; or demand simply exceeds capacity.

Sometimes it’s a sign of growing pains. It means the information technology (IT) experts who have been improvising the free public Wi-Fi network are attempting to expand it from Cruz Bay to Coral Bay.

“It’s a tradeoff,” said Rob Tutton, a former Navy communications researcher who works on the team.  “We’re pushing further while we’re trying to maintain our public access spaces,” he said.

But sometimes he has more specific positive news.  One day, he announces the team has set up equipment that will relay a signal from Cruz Bay to a hilltop villa in Great Cruz Bay; another day, he reports the signal now reaches Ditleff Point on the south shore of St. John. As of November 9, the plan is to send the signal directly from Great Cruz Bay to Bordeaux Mountain where there is a straight shot to Coral Bay.

Coral Bay could have internet and cell service by next week.

It’s easier said than done.  The communications towers at the top of Bordeaux mountain on St. John blew down during Hurricane Irma. Teams from several branches of the military, and NGO’s including St. John Rescue, the Bloomberg Response Group, Kenny Chesney’s Consultants, and DIRT couldn’t just drive up the road.  They had to bushwhack their way through tangled brush and downed trees to try to rebuild communication towers for internet and cell service.

The towers at Bordeaux are being replaced but are not yet operational. The IT team found a way to work around the problem: A homeowner on Bordeaux offered to place the critical equipment on his property where there’s a clear line of sight to the fire station at Coral Bay.  A landscape company then volunteered a crew to clear the way for the point-to-point antenna to be installed.

Gyuraki is the unofficial head of the collective of volunteers who regularly scramble through the bush or climb atop buildings to install the equipment which brings cell phone and internet service to the remote parts of the islands.

“Through, around, or over, I’ll get it to work” is his motto.

Gyuraki compares their task to “building a table to feed the public a turkey dinner while standing on quicksand.”  To add to the challenge, whatever equipment they install must be able to be taken down quickly in the event of another storm.

In remote locations, self-sustaining equipment is essential.  “We need consistent power,” said Zac Clancy, an IT expert with Global DIRT.  “At Bordeaux, we’re not able to run up there and fill generators, so we’re going to solar. We now have a 100 percent solar-generated site on Lovango Cay pushing internet connections to the north side of St. John and Cruz Bay.”

Irma has provided plenty of opportunities to test out cutting-edge technology, like VANU units which use Voice Over Internet Protocol (VOIP).   VANUs essentially function like antennas that can transmit signals from any cell phone provider, like ATT, T Mobile, or Sprint, over the internet.

Getting phone companies to agree to allow their signals to be transmitted on VANUs could be tricky, but with the assistance of the Bloomberg Group, the legal hurdles were cleared within a matter of days rather than months.

“We’ve been trying to [invent] something like this for years,” said Clancy.  We built our own version once, but it was too heavy and expensive [to scale up.]”

VANUs are named after the son of the founder of Bose, the company that manufactures quality sound equipment. VANU units don’t look very remarkable.  The one situated at a Cruz Bay government agency resembles an ordinary metal box the size of a small suitcase.  Six units have been deployed, and three more will be installed in the area around Coral Bay.

Clancy said he didn’t know their cost.  “They’ve been donated to us. We’re helping to test them in disaster spaces.”

VANU units won’t allow users to stream videos or download big files, but they will allow them to make phone calls and send texts from various locations.   Once a VANU was installed at Ditleff Point, residents of Fish Bay began getting cell phone signals for the first time ever.

For residents of Coral Bay, basic cell phone service would be a big deal.  For now, if they don’t want to drive to Cruz Bay, they must cluster around the fire station in Coral Bay to get a signal provided by a satellite antenna on the roof.

Although that antenna’s performance is less than ideal, Clancy said it has allowed the public to make 3,500 calls and send 15,000 texts as of November 6. Considering that immediately following the hurricane, the only link to the outside world was a solitary satellite phone at the office of the Coral Bay Community Council, this marks a big improvement.

The IT specialists are excited that the work they’re doing on St. John can be duplicated and used in other remote places or disaster sites.  “The research that we’re learning every day is refining the process,” said Gyuraki. 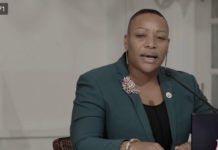 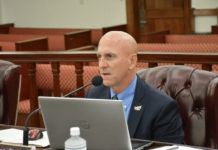 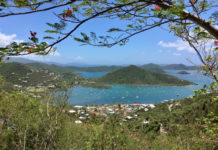