Several of St. Thomas’ most legendary structures are on the real estate market, including Skytsborgtarn, better known as Blackbeard’s Castle, a National Historic Landmark.

Many were offered seven years ago as a package deal but are now up for sale individually.

In 2015, eight properties comprising a swarth of the colonial past were on the block for a total of $18 million. Blackbeard’s Castle, Hotel 1829, Britannia, Haagensen House, Villa Notman, Mendlicott Estate, Bankhus, and the Magens-Pedersen Estate are clustered together on about three acres of the hillside overlooking Charlotte Amalie harbor and downtown.

Most of the properties had been acquired and restored, and converted over a period of years by Vernon Ball and members of the Ball family. Most recently, many of them were part of a walking tour promoting heritage tourism on St. Thomas.

When they were presented as a group, a website touting the offer, www.estateskytsborg.com, said that “[b]ecause of historic and sentimental value, the owner will only sell the entire compound to a sole buyer” who would agree to preserve the historic value of the combined properties.

It is unclear exactly when and why the decision was made to break up the group, but two of the properties have already sold: Mendlicott Estate and the Magens-Pedersen Estate.

April Newland of Newland Real Estate, LLC, has the listings for the other six. They appeared on the market earlier this month.

“We’ve had a lot of interest,” she said, and several showings.

Cruise lines have been asking whether the walking tours will be reinstated, Newland said, but “No tours are being allowed now.” There’s also public interest in the tours. At Hotel 1829, “As soon as we open the gate (in preparation for a showing), people come.”

Skytosborgtarn (Danish for Sky Tower) is by far the oldest of the six historic properties now for sale. Built in 1679, the original structure was a fortress meant to buttress Fort Christian, which sat below on the water’s edge, protecting the island against invasion. The distinctive tower dates from the 1700s and offered a strategic lookout for ships entering Charlotte Amalie Harbor. 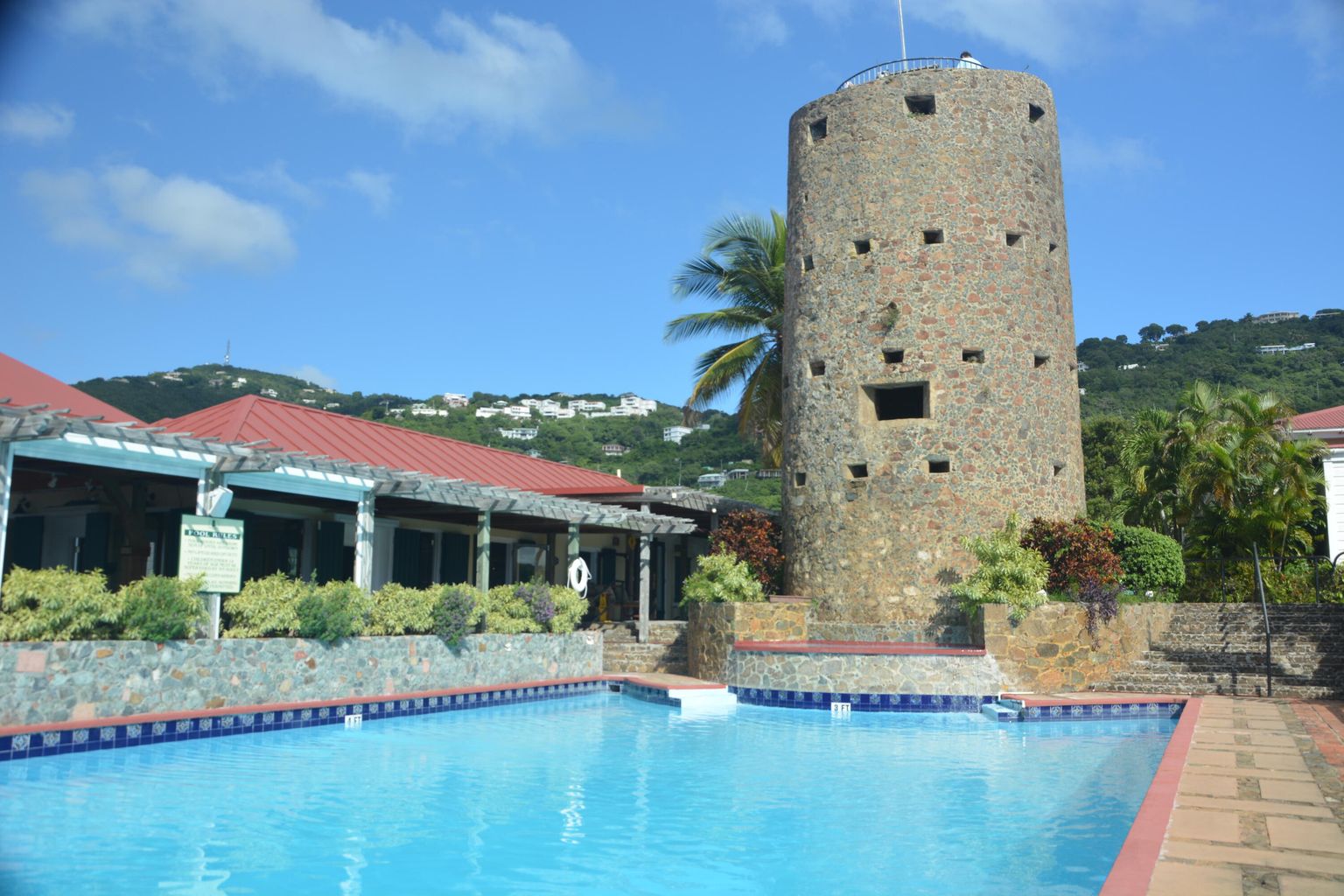 In a nod to the era of piracy which is a real part of the island’s past, the property later acquired the name Blackbeard’s Castle. The notorious pirate (given name was Edward Teach) could well have visited St. Thomas, but there is no proof of any connection to the landmark tower.

Still, the name draped the property with romance, and in recent decades, it was an elegant and popular restaurant, bar and entertainment center, and guest house, with wide appeal among residents and tourists under a succession of owners in the 1980s and 1990s. A group including Michael Ball, Vernon’s son, acquired it in July of 2001.

While there are many “historic” properties in the territory, Skytosborgtarn is one of only five to earn the “National Historic Landmark” distinction. The others are the Columbus Landing Site at Salt River Bay and Fort Frederik on St. Croix and the St. Thomas Synagogue, and Fort Christian on St. Thomas.

The designation is given to buildings, districts, objects, sites, or structures “recognized for historical significance,” according to Wikipedia. Of more than 90,000 places on the National Historic Register, only 2,500, or about three percent, are National Historic Landmarks.

Blackbeard’s Castle/Skytosborgtarn is zoned for a hotel, bar, and restaurant, according to the real estate listing, and is priced at $3.85 million. Besides housing 11 bedrooms and 15 baths, the property includes a swimming pool, some parking, and a separate structure known as “Britannia House.”

Built in 1847, Britannia House is one of the few remaining wooden structures from that period, according to the listing. It got its name from the title of its second owner, Robert Boyd Lamb, who bought it in 1858. He was “Her Britannic Majesty’s Consul” on St. Thomas. Former owners of Blackbeard’s Castle acquired it in 2005.

Sitting prominently on Government Hill, a few doors from Government House is the gracious former residence of a French sea captain named Alexander Lavalette. His initials adorn the wrought iron decorating an upstairs balcony. Designed by an Italian architect with Spanish motifs, the structure was built in 1829.

It was used as a private residence until the early 1900s, when it was turned into a hotel.

The late Vernon Ball renovated it, rechristened it, and opened Hotel 1829 in 1967. It soon became a premier site for fine dining, sophisticated sipping, and elegant hob-nobbing in a relaxed atmosphere. Ball, who held the title “Baron,” added a charismatic charm to the property, where he frequently showed off his championship skills at backgammon.

Indoor features include an ancient brick fireplace, hand-painted Moroccan tiles, and a stained glass window titled “In Search of the Promised Land,” which was the work of William Comfort Tiffany, the first design director for the famous Tiffany and Co. and the son of its founder. Guest rooms circled a swimming pool.

The exterior is graced with a large deck on the street side, offering a sweeping view of the harbor and a petite courtyard at the backside.

In its most recent public iteration, as part of the walking tour, it added a gift shop and rum emporium. There have been repairs since the 2017 hurricanes destroyed the upper bedrooms.

In the late 1990s, along with partners, Michael Ball began buying and renovating nearby historic properties, renaming some of them to reflect earlier versions of their stories. He partnered with the St. Thomas Historic Trust to develop them into a viable heritage tourism attraction.

Key to the movement was Haagensen House, which sits behind and up the hill from Hotel 1829 at the top of the “99 Steps.”

It was built in 1822 by John Wright, a lieutenant of the St. Thomas Fire Brigade. It takes its name from the man who bought it in 1837, Hans Haagensen, who came from Copenhagen to run the Bank of St. Thomas. He and Sarah Julia Magens (the girl-next-door) raised nine children in the house.

It was converted into a museum, filled with period furniture borrowed from local collections and bought from Caribbean sources, and was the centerpiece of the walking tour in the early 2000s.

There were five exhibit rooms. The kitchen, as was common in the era, was in a separate building from the main house to protect against destruction by fires.

Older residents know this property better as “The Mark” or “The Mark St. Thomas.” That was its name for many years when it served as a popular restaurant and bar and small guest house. It was later acquired by local hotelier Sam Boynes who dubbed it “L’Hotel Boynes” and sold it to Ball in the mid-1990s.

Dating to 1860, the property was built by Robert Notman, a Scottish engineer who helped build the West Indian Company Dock. He lived there with his wife Mary and daughter Jane. In the early 1900s, it became an Anglican parsonage.

It’s one of just 16 old houses remaining on the island that made use of a common building material from the colonial period – yellow bricks that were used as ballast in ships traveling from Europe to the Caribbean. Those were combined with the extremely hard native stone, augite andesite, commonly called blue bitch.

Although many of the historic properties in the area suffered some damage from the 2017 hurricanes, Newland said “most of them stood up pretty well,” and Villa Notman held up very well, a testament to its original construction.

Sitting next to Government House on Government Hill, the property dubbed Bankhus contains a relatively small main residence and two cottages. A cornerstone bears the mark 1844.

The property originally belonged to the Lutheran Church and was purchased by a merchant. It went through many owners, including one who was the manager of the Danish West Indian National Bank, hence its designation as “Bankhus.” Later it too was a guest house.

In a “legend-has-it” reference, the listing for it mentions the possibility that the author Herman Wouk stayed in one of the cottages while he gathered material for his famous, if not altogether flattering, novel about life in the Virgin Islands, “Don’t Stop the Carnival.”