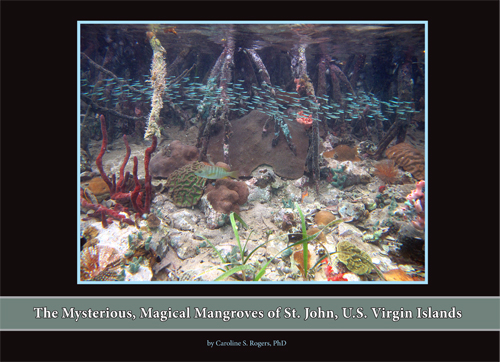 The release of the heavy gas hydrogen sulphide is a normal occurrence and has brought an impossible to miss odor to the Coral Bay mangrove area, above.

Coral Bay residents have recently been complaining about a strong sulphur-type of smell emanating from the mangrove area, which is impossible to miss as anyone who passes near the area can attest.

Some residents have chalked the stink up to seaweed decomposing on the shoreline, while others have pointed their fingers at boats in the harbor.

“People are smelling the release of hydrogen sulphide,” said Ray. “That area releases hydrogen sulphide because decaying matter gets incorporated into the soil, which is saturated with water.”

“So that matter is breaking down in an environment with no oxygen which alters the decomposition route giving you hydrogen sulphide instead of carbon dioxide, which we would hardly smell,” he added.

When organic matter decomposes in a forest area, for example, there are fungi and bacteria breaking down the top layer of soil, but there is plenty of oxygen, so the decomposition results in odorless carbon dioxide, explained Ray.

“The forest is a mostly dry environment, but in a wetland, you always have a lens of water right near the surface and so all of this activity is going on in an environment that is pretty much anaerobic,” said Ray. “It could be a regular CO2 route, but here you have just stagnant water that will just sit there. When you have this with no oxygen because of all this water, it will choose a different route of decomposition.”

“Instead of aerobic, you have anaerobic restoration which gives you hydrogen sulphide instead of carbon dioxide,” Ray said.

While this type of decomposition is occurring all the time, the smell grows stronger when the water table drops, Ray explained.

“It all depends on how much respiration is going on,” said the plant ecologist. “When we got the dry weather lately, the water level dropped and it exposed all of this area that held the hydrogen sulphide.”

“It’s a gas now and it’s a heavier gas, so it doesn’t just go way up into the atmosphere,” Ray said.

“It kind of hovers near the ground and that is why it’s been a strong smell,” he added. “Also, there hasn’t been much wind, which would have helped disperse the smell.”

With winds last week hovering between 15 and 19 knots, the hydrogen sulphide smell improved somewhat, but what will really help is more rain, according to Ray.

“If there is enough rain to fill all the air space in the soil, which can happen pretty quickly, that will help with the smell as well,” said the local plant ecologist.

Fair Weather in USVI for Next Several Days