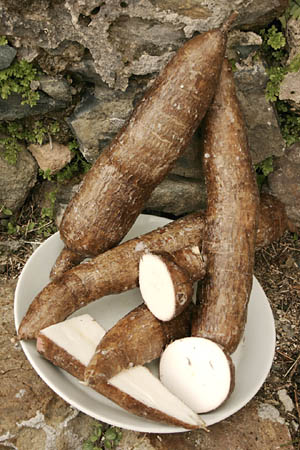 Yucca roots, above, are also known as cassava or manioc.

We, being creatures that like an endless supply of things, should give thanks for the abundance of cassava, which is available throughout the year.

The yucca root, a locally grown vegetable, also known as cassava or manioc, is a white, starchy, tropical vegetable. It is widely grown and consumed in Africa, Asia, Latin America, and here in the Caribbean.

Originally brought to Africa by Portuguese traders, cassava was then carried to the West Indies from Africa.

This tall  sometimes reaching 15 feet high  shrubby tree thrives better in poor soils than any other major food plant. Cassava requires a minimum temperature of 80 degrees to grow, which makes it a champion plant during the dry seasons.

Cassava is a vital food staple for about 500 million people in the world. The plants starchy roots produce more food energy per unit of land than any other staple crop, and are the base of many starch products.

Compard to Potato
Cassava is comparable to a potato, except that it has twice the fiber content and a higher level of potassium. It also contains a high amount of vitamin C and carbohydrates.

The yucca root is cooked in various ways, similar to how we might cook potatoes. It can be boiled and mashed, baked, fried, grated to make pancakes, dried and ground into tapioca flour, sliced for cassava chips, shredded in cassava bread, used in wraps, casseroles, salads, and soup. Yucca roots have a thick peela little like barkwhich must be peeled off before the cooking begins.

Various Uses
Like most local goods, cassava is employed for many different things. Yucca roots are used medicinally as a therapeutic anti-inflammatory medicine.

These abundant roots can be pounded in water to produce lather for soap and shampoo.

The leaf of the yucca is used to make woven mats, sandals, and baskets, as well as being eaten. Before the days of aerosol cans of ironing starch, cassava was used as a starch for clothes.

The yucca plant was also a supplement in cattle feed during the droughts in the early 20th century. The roots make a paste, flour and grain that have various purposes. The flower that the cassava produces may be used in salads, even if the flavor is quite mild.

Some species of the yucca fruit can be eaten raw, however the particular species called seven month cassava is deadly to eat, and not sold in local markets. It is important to wash these starchy roots very well before cooking.

Most cassava is grown on small farms, and harvesting takes place six months to three years after planting. There are many pests that you have to work around when cultivating cassava as well as dealing with root rot.

Cassava lasts only a few days to a week on the shelf, but when preserved with a bit of paraffin they have a longer shelf life.

Yucca root fries, above, are a delicious snack.

Yucca Root Fries
In a culture which consumes a lot of French fries, a new angle on fries is yucca root fries.

Sweet Plantains restaurant in Coral Bay serves yucca root fries with a cilantro pesto and once you try them, youll be hooked on the cilantro pestowhich becomes a requirement when eating yucca fries.

To begin making your own fries, start with 2-4 roots. Peel them, cut them into small pieces to boil, or better yet to steam them in the pressure cooker maintaining the nutrients in the roots.

Let them cool, cut them into smaller piecesthe size you want your fries, and prepare your frying pan with hot oilcorn or vegetable oil works well.

Now its time to begin frying! Let the fries get nice and dark, golden-brown if that is your preference, pull them out of the oil and while they are still hot, lightly salt them.

Delicious Snack
They are a delicious snack, and a much healthier option than McDonalds fries.

The cilantro pesto can be as simple as very finely chopped cilantro and raw garlic, salt, pepper and olive oil.

The pesto moistens the starchy yucca fry and makes for a fully satisfying experienceand you dont even have to wait for them to come into season.

You can find them in the market all year long.

Fair Weather in USVI for Next Several Days

After Renovations, No More Flooding at Pine Peace Basketball Court