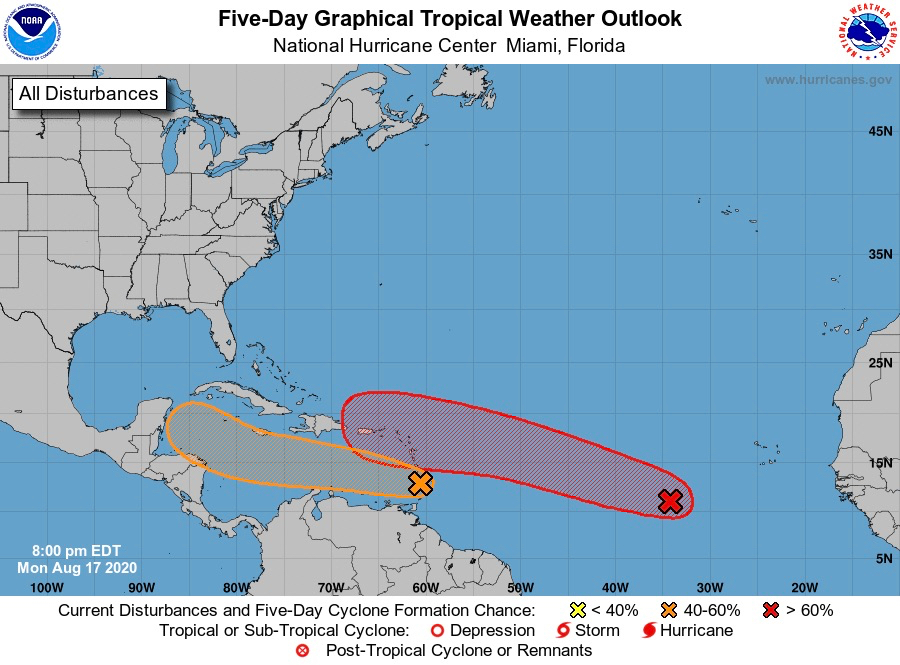 A tropical wave near the Windward Islands continues to produce showers and thunderstorms as it heads across the southern Caribbean towards the Yucatan, while a broad area of low pressure about 700 miles west-southwest of the Cabo Verde Islands has become better organized and is moving across the Atlantic towards the Leeward Islands, demanding the attention of Virgin Islanders.

According to the National Hurricane Center, the system over the Atlantic has a 90 percent chance of tropical development in the next five days.

The wave is forecast to move westward to west-northwestward at 15 to 20 miles per hour during the next few days, and environmental conditions are expected to become more favorable for the development of a tropical depression during the middle-to-latter part of this week while the system moves across the central tropical Atlantic.

Satellite images indicate that this broad area of low pressure out in the Atlantic basin has become better organized since yesterday, with increasing banding features near the center, the NHC said. Environmental conditions are conducive for further development, and a tropical depression is likely to form within a couple of days while the system moves westward to west-northwestward at 15 to 20 mph across the central and western portions of the tropical Atlantic.

Meanwhile, the western system already crossing the Windward Islands is moving westward at about 20 mph and is expected to continue to move quickly westward over the eastern and central Caribbean Sea during the next couple of days, which is likely to limit significant development, the NHC said. After that time, however, the system is forecast to move more slowly westward across the western Caribbean, where upper-level winds could become more conducive for the development of a tropical depression during the latter part of this week.

Regardless of development, locally heavy rainfall and gusty winds are expected over portions of the Windward and the southern Leeward Islands through Tuesday morning.

V.I. Will Take Part in National Drill to Prep for COVID-19 Vaccine

DUI Case Has A Date With The V.I. Parole Board