The National Park Service administrative center at Vessup Bay in Red Hook will be renovated with a state-of-the-art septic system and new comfort station, while preserving the “Mission 66” era design of the main building, a meeting of the St. Thomas Coastal Zone Management Committee was told Wednesday.

The property – a “passive recreation” area fronted by mangroves and used by everyone from bird watchers and picnickers to the National Guard for training exercises and school groups for nature outings — was damaged in the twin Category 5 hurricanes of September 2017.

While the grounds reopened to visitors on a limited basis in January, the main office building – constructed under a post-World War II program to modernize and expand NPS properties called Mission 66 – has been uninhabitable since the storms due to major roof damage, V.I. NPS Superintendent Nigel Fields told the committee members.

Ultimately, Congress committed about $1 billion in spending on park properties under the 1960s program to mark the 50thanniversary of the NPS’s formation in 1916, hence the name Mission 66, said Fields.

The redesign of the NPS’s Red Hook site is about 90 percent complete and will encompass green technology to protect against coastal vulnerabilities including wind, water, salt and sea level rise, said project architect Chuck Baxter of Croft & Associates in Atlanta.

“I love this quote – ‘The greenest building is the one that is already built,’” said Baxter. “Why I love that is, if we’re able to adapt our infrastructure and have it evolve to our new uses, we can use those buildings that we’ve already invested in. Lucky for us, this building is a historic 1960 [building] and if we can adapt it to have it continue to be useful to us, that’s a great investment.”

Originally constructed as a maintenance garage, the building was converted to offices in 1970, said Greg Kaiser of the NPS Denver Service Center Design and Construction Division who is overseeing the project with Baxter. 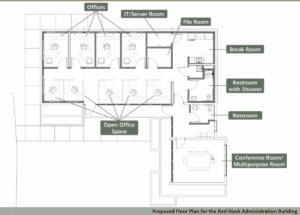 Renovations will include hurricane-rated windows that will also be functional to allow for cross-ventilation if the air conditioning fails, reinforcing the original concrete block masonry, cement board versus regular drywall on the interior walls to protect against water, and outdoor lighting rated for wet conditions, said Kaiser. The building also will be wheelchair accessible.

New above-ground cistern tanks will be installed on a pad at the back of the building, and the parking lot will be repaved and will include handicapped spaces, said Kaiser.

“It’s a septic tank on steroids, basically,” said Baxter. “I would not recommend this, but I have heard people say that in some of them you can literally drink what comes out of the end of them. I would not do that, but I have seen clear water come out of them. … It is a much more environmentally friendly unit that the effluent that comes out of it you can water your yard with,” he said.

Resident Lorelei Monsanto asked whether a pump-out station for visiting mariners would be included in the plans, but Fields said no, adding that the site does not permit overnight moorings. However, the dock and the property are accessible after-hours to first responders transporting patients by boat from St. John, he said.

Notably, the plan maintains the Mission 66-era look of the main building, particularly its pyramid roof design, and does not increase the footprint except for the new 200-square-foot comfort station that will replace the portable toilet currently on site, with an equipment storage area built into the back of that structure, said Baxter.

“Our goal is to be very light with our approaches to making these modifications. The goal visually is to keep the building looking as it does. These are mostly just repairs, repaired with the same overall aesthetic, that will have the same overall view,” so there will not be any major changes apart from the new comfort station, said Fields.

The project will cost about $2 million, with hopes to start construction in 2022 or 2023, depending on congressional funding and National Park Service and V.I. Coastal Zone Management approvals, said Baxter.

Committee member Winston Adams voiced support for the project as presented and shared his memories of helping to build the dock at the property when he was a student.

“I must say, I am quite familiar with the area, because as a student in 1961 myself and several other students were the ones who put in the dock. Not the exact dock – it was much smaller. But we put in that dock … and then we set up the parking lot. Then we put up five buildings in St. John. So I am quite familiar with the area and I am glad to see the development,” said Adams.

The committee will make a site visit to the property before it renders a decision on the proposed plan, most likely at its next meeting in December. The public may view the plans on the DPNR-CZM website and submit comments by Nov. 24 via email to czm@dpnr.vi.gov.

In other business, the committee unanimously approved a major CZM permit for Axis Development Group to develop site access to a property in Estate Bovoni on St. Thomas for heavy equipment storage and container-based offices.

Because the property is a known sensitive habitat that may be home to native tree boas, and could also contain cultural artifacts, the developers will work under the supervision of the Fish and Wildlife division of the Department of Planning and Natural Resources, and the State Historic Preservation Office, said Anita Nibbs, an environmental planner with DPNR’s Coastal Zone Management division.

Initial clearing of the property must be done by hand with a certified arborist to detect, and protect, tree boas that will then be relocated by Fish and Wildlife experts, said Nibbs, and an archaeologist is required to be on site to monitor for any cultural finds as development proceeds, she said. Additionally, erosion control and silt fencing will be erected to prevent runoff during construction.