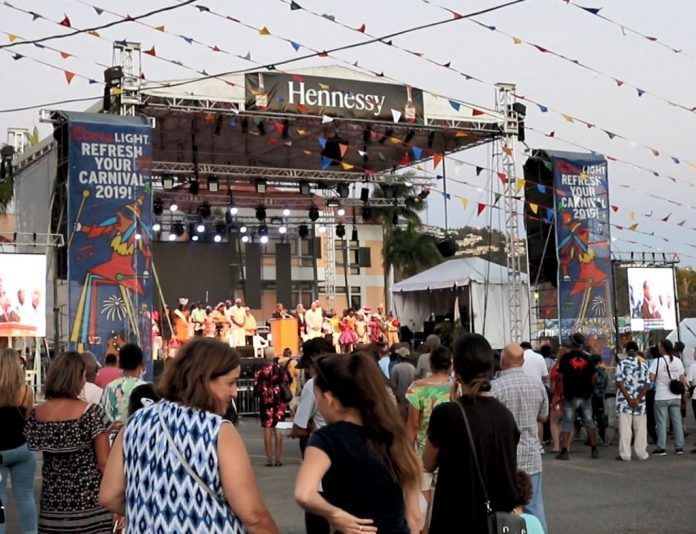 Encouraging residents to enjoy the spirit of the Carnival season, officials opened of “Cogie’s Musical Ville” Friday night, asking that safety be at the top of the priority list.

“We’re going to pray that it’s going to be a beautiful, beautiful Carnival this year. If you believe that, let’s hear you shout,” pastor Samuel Weeks shouted to the audience before starting the opening prayer.

Weeks got a good response, but that didn’t stop other speakers – St. Thomas-Water Island Administrator Avery Lewis and Senate President Kenneth Gittens, among them – from making the same plea, which was also echoed by Gov. Albert Bryan, who joked first about not being able to be an active part of the revelry this year.

“I have to be gubernatorial,” he deadpanned.

On a more serious note, however, Bryan spoke about how the island comes alive during the Carnival season with events and experiences that put the spotlight on everything from V.I. history, to the islands’ food and music.

With the best of what the territory has to offer on full display, it would be a shame to display the worst, he added.

“So let this be the safest Carnival,” the governor said, calling for friends and family to look out for one another over the next week.

Echoing his words, Lt. Gov. Tregenza Roach also reminded the crowd about the historical significance of Carnival and its role in building community.

“Carnival is a time to be your personal best, to love yourself and love one another,” Roach said. “We celebrate the best of who we are and in doing so, we do a great job in building community.”

This year’s village honors Trinidad native Michael A. Coggins, an accomplished trombone player who was first inspired to pick up the instrument after attending the first St. Thomas Carnival in 1952.

A decade later, Coggins signed on to work for the V.I. Daily News, where he remained for 20 years.

“It was at this point the art of trombone performance in dance bands in the U.S. Virgin Islands began to take its rightful place in dance bands, with Michael A. Coggins as the pioneer,” Carnival Committee organizers said. “Michael Coggins unleashed his inner-most musical passion to thousands of Virgin Islanders, dance-goers and students. He set the standard in trombone dance band music performance. He became the model, the standard, a true ambassador, bringing from Trinidad the flavor, customs, and traditions of dance band trombone performance to the territory.”

Around the village, booths paid homage to the musician with elaborate art, and before the end of the evening, Bryan, Roach and other officials accompanied the Pan in Motion steel band from booth to booth in another tribute. The Best Printed Picture award went to Booth No. 5, while Booth No. 9 was runner up.

Booth No. 18 won for best overall booth, and owner Henry Alexander said this was the fourth award he’s picked up over this past nine years in the village. Asked why village-goers should make a stop in Friday, Alexander said his booth is the best flying fish and oxtail, and, this year, something new: flavored wings.