Committee on Rules and Judiciary

Earle B. Ottley Legislative Hall, St. Thomas (There will be no other committee meetings this week, Jan. 6-10)

Bill No. 33-0105 — An Act amending specific sections of Title 12, chapter 21, Virgin Islands Coastal Zone Management by: (1) updating the chapter to reflect the current name of the department, (2) increasing the term and per diem of members of the Coastal Zone Management Commission, (3) modifying some of the standards for the issuance of coastal zone permits, (4) modifying some of the requirements for the issuance of permits for the development or occupancy of trust lands or other submerged or filled lands, and (5) decreasing the time period for filing an appeal with the Board of Land Use Appeals and decreasing the time-period within which the Board of Land Use Appeals must hold a public hearing on an appeal. (Sponsored by Senator Alicia V. Barnes, Senator Marvin Blyden, Senator Steven D. Payne)

Bill No. 33-0212 — An Act approving the Lease Agreement between the Government of the Virgin Islands and Universal Concrete LLC for Parcel No. 149B Submarine Base, No. 6 Southside Quarter, St. Thomas, Virgin Islands. (Sponsored by Senator Novelle E. Francis, Senator Donna Frett-Gregory, Senator Marvin Blyden and Senator Dwayne M. DeGraff.)

Bill No. 33-0136 — A Resolution honoring and commending Valrica Miranda Maria Bryson for her contributions to the Virgin Islands school system, her mentorship of Virgin Islands youth, and her many years as a music educator (Sponsored by Senator Javan James and Senator Steven D. Payne)

Bill No. 33-0065 — An Act requiring the Department of Agriculture to establish and implement a Well Drilling Unit Program (Sponsored by Senator Allison DeGazon)

Bill No. 33-0037 — An Act requiring the Department of Planning and Natural Resources (DPNR) to identify and rehabilitate five existing ponds in the St. Croix District and two existing ponds in the St. Thomas District to capture stormwater runoff to be used primarily by farmers, allowing DPNR to seek assistance from the USDA Natural Resources Conservation Service, and requiring that DPNR maintain the rehabilitated ponds (Sponsored by Senator Allison DeGazon; Co-Sponsored by Steven D. Payne) 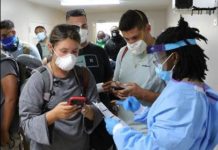 VING Is Screening Travelers at Both Airports 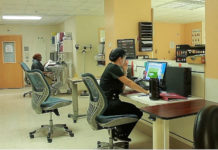 Coronavirus Patient Gets Applause, Celebration From JFL Staff Upon Discharge