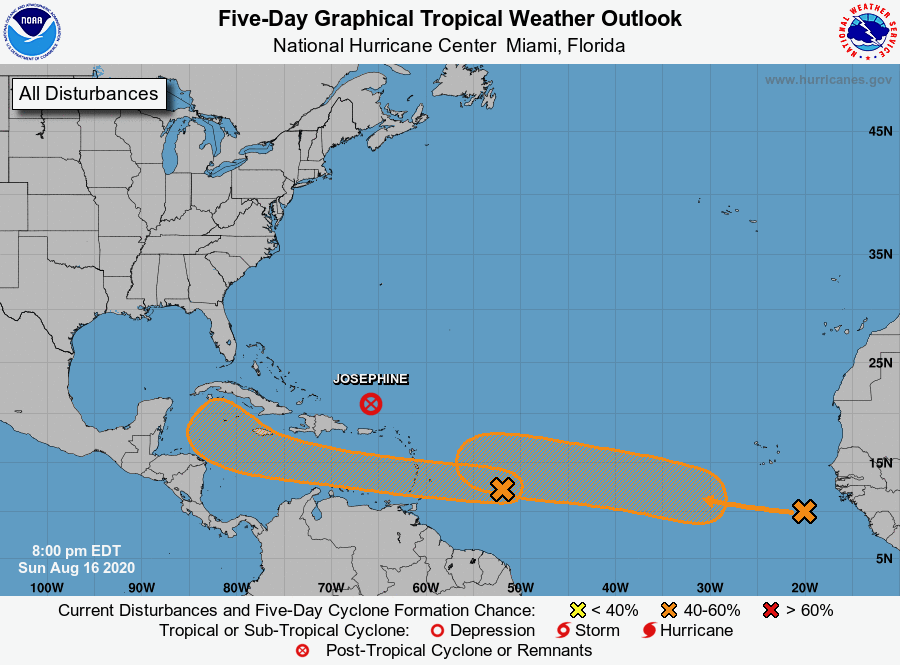 The remnants of Tropical Storm Josephine are spinning off to the north and northeast, having passed by the Virgin Islands. But there’s no time to relax as two tropical waves are speeding across the Atlantic towards the Caribbean.

From Aug. 20 to late September, the table is set for a very active hurricane season, as tropical system after system are expected to move across the ocean to the Caribbean without getting turned north, away from the islands. Several factors will contribute to this anticipated uptick in activity: A strong upward motion pulse of a system called the Madden-Julian Oscillation – or MJO – is expected to push into the Atlantic Basin as early as this week and remain in place through much of September.

These are the strongest MJO signals seen in the peak of the hurricane season in years and is generally not a good sign of things to come. The National Oceanic and Atmospheric Administration offers an explanation of the MJO online here.

Extremely warm ocean temperatures, the forecast for lower than average wind shear, above average rainfall and strong tropical wave activity over Africa adds to the potential for a busy peak of the season.

One other element that must be factored into the scenario is a high-pressure system that appears to be setting up from near Canada through the northeastern United States and will likely remain in place through September. This area of high pressure could effectively block tropical systems from turning to the north, instead guiding them westward across the tropical Atlantic and Caribbean.

According to the National Hurricane Center’s Sunday evening update, shower and thunderstorm activity has continued to increase in association with the fast-moving tropical wave about 500 miles east of the Windward Islands. This disturbance is expected to move west at about 20 mph during the next few days, and that fast forward speed is likely to limit significant development while the system approaches the Windward and southern Leeward Islands on Monday, and moves across the eastern Caribbean Sea on Tuesday. After that, however, the system is expected to move more slowly westward across the central and western Caribbean Sea, where upper-level winds could become more conducive for the development of a tropical depression during the middle-to-latter part of this week.

A second tropical wave is following on the heels of that system, the NHC said, and the agency warned that one really bears watching.

Currently over the far eastern tropical Atlantic well to the southeast of the Cabo Verde Islands, it is producing a large area of cloudiness and disorganized showers. The wave is forecast to move westward at 15 to 20 mph during the next few days, and environmental conditions are expected to become more conducive for the development of a tropical depression during the middle-to-latter part of this week while the system moves across the central tropical Atlantic.

The NHC gave the system a 50 percent chance of formation within the next five days.