The governor wears it around his neck at many significant public events including Monday when Gov. Albert Bryan Jr. delivered the State of the Territory address – but have you ever wondered exactly what it is?

The official symbol of the Office of the Governor, a “chain of ribbon and metal,” was commissioned by the eighth Legislature of the U.S. Virgin Islands to commemorate Melvin Evans, the territory’s first elected governor.

On the chain are seven “circular shields” containing the flag of each of the bodies that have laid claim to the islands over the years – Spain, England, Holland, France, the Knights of Malta, Denmark and the United States.

“These shields shall culminate in a large ‘V.I.’ on a golden plate, having at its base three pearls symbolizing the three major islands of the Virgin Islands and the date of the inauguration of the first elected governor. The symbol of the Office of the Governor shall be presented to the governor at the time of his inauguration,” according to the bill.

An appropriation of $2,000 was included to cover the cost of the necklace, which is also worn by the governor at major public events, including the State of the Territory address. 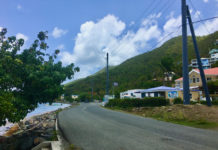 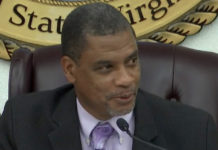