Meetings across three islands this week gave Taxicab Commission officials the chance to present and explain proposed fare increases that they said were borne out of feedback from automobile for hire operators whose prices haven’t been adjusted in nearly two decades despite rising expenses.

Speaking with the Source Wednesday before the meeting with St. Thomas operators, Taxicab Commission Executive Director Linda Smith said the new rates proposed would give operators a baseline from which to work. Though there are reports that the fares are increasing across the board by 50 percent, Smith said that was not the formula used when the process of surveying operators and getting feedback on their myriad issues started last October.

Instead, the increases are an aggregate of about three percent, folding in the cost of living, inflation and other economic costs that have continued to adjust since the late 1970s but have continued not to be reflected in the fares, she said. The meetings have given automobile for hire operators the chance to understand what is being proposed and give feedback, including adding fares that have already been incorporated into the taxis’ schedules as tour options and routes have expanded over the years. A second round of meetings is upcoming and Smith said the final rates have to be vetted at several levels, including the Senate and the governor.

While operators across the board have been in favor of the increase, some questioned whether too much of a hike could lead hotels to hire their own transportation to and from airports and shopping centers. Smith said first, those modes of transportation would still be under the Taxicab Commission’s purview and second, nothing has been passed at this point, only proposed, and still amounts to only a few dollars upward in most cases.

At the Sunny Isle Amphitheater Monday, Smith presented the rate increases to a crowd of about 30 guests and in return, asked for suggestions pertaining to the tariffs — the document that determines the maximum fairs you are legally permitted to collect from your customers. The increases were approved by the Taxicab Commission board last month, and factored in, officials said, the cost of fuel increases due to the war between Russia and Ukraine, read Smith.

“In all fairness to you, our automobile-for-hire operators felt that an increase was warranted,” Smith said.

According to Title 20 of the VI Code Subsection 404, “The maximum rates collected for the service of motor vehicles operated for hire shall be fixed by the Taxicab Commission after investigation and receipt from any interested parties, provided that the rates fixed by law prior to and together with the enactment of this subsection shall apply until and unless changed by the Taxicab Commission.”

“This is the reason we are here,” said Smith.

Francis Arthur, who has been an automobile-for-hire operator for 60 years and is the president of the airport taxi stand, said they “should not be in the same category as other general taxi drivers on the island.” He said that operators must lift 50-pound bags and said that it is costing the drivers to be at the airport. “The V.I. Port Authority insisted that we pay in back taxes since the pandemic began,” said Arthur. An issue that Smith agreed to meet with Arthur about on another date.

Marilyn Charles, who has been a taxicab operator for 32 years, mentioned that the rate sheet did not include the regular price from Christiansted to Frederiksted. According to Charles the current rate is at $2.50 and should be increased to $3 during the morning hours and $4 during the night.

Also present at the town hall was Sen. Genevieve Whitaker, who said, “I really suggest that the board takes some drastic interim measures, so it does not take over 15 years.” She suggested even less than five years. “I would like to really see as we have more townhall engagements an even more holistic approach and let us get these individuals who are a part of the stakeholder efforts.”

Smith agreed and said it should be reviewed every three years.

Currently serving on the board are nine members appointed by the governor and three members from the taxi industry (one from each island, who must own medallions that confer the right to drive a taxi).

“We will take each and every recommendation seriously,” said Smith.

Here are the new tariffs: 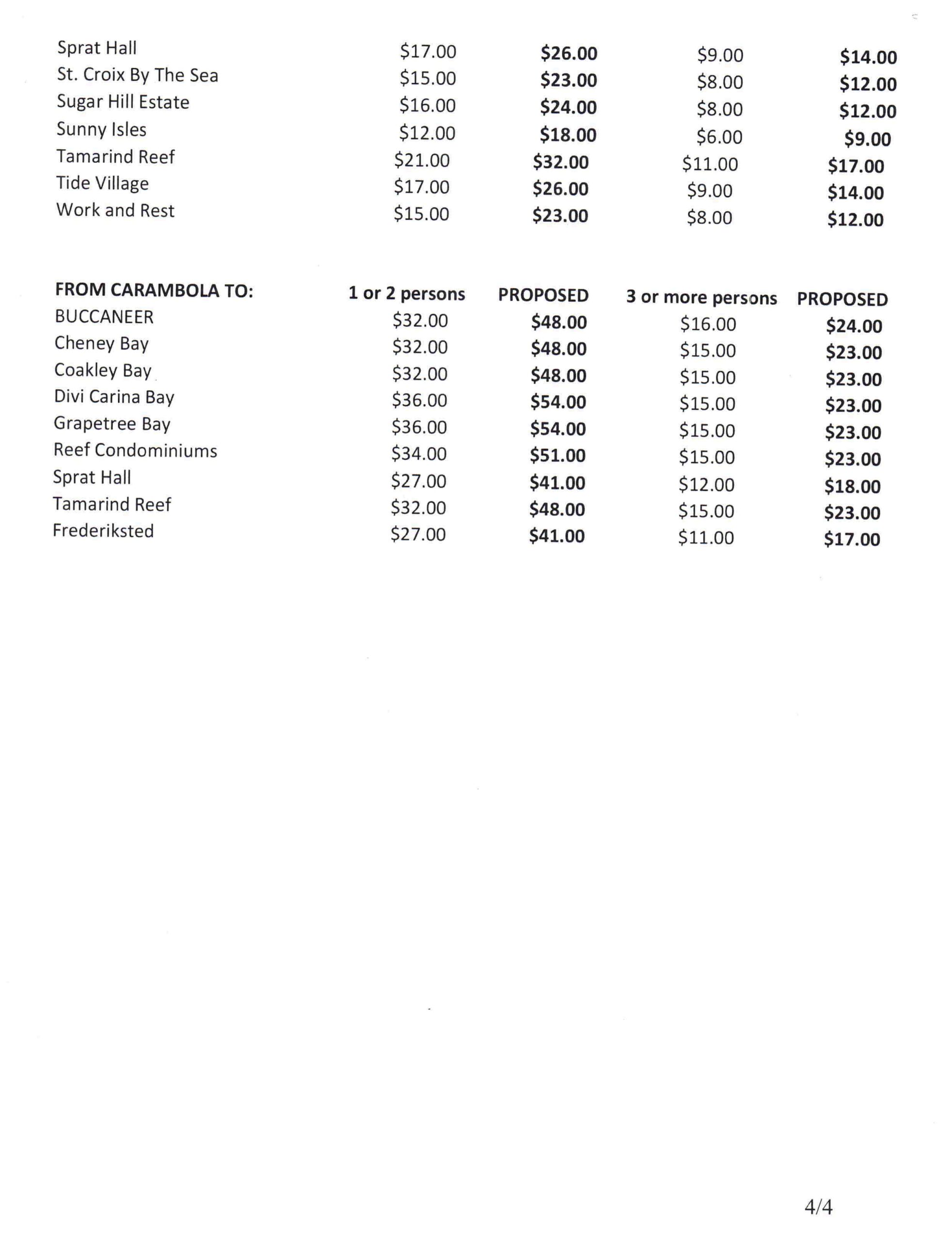 Actor Robert Campbell from ‘Shottas’ to Appear at ‘All Black Affair’