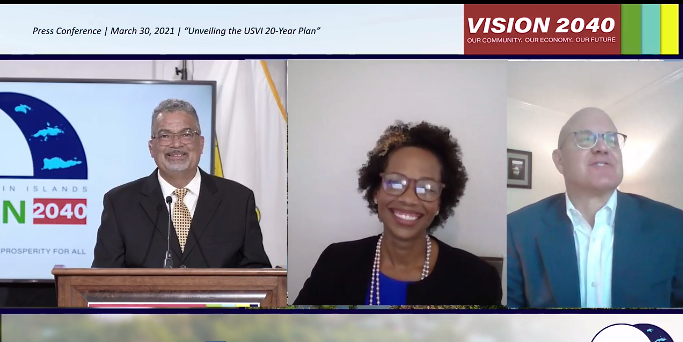 The Economic Development Authority revealed the U.S. Virgin Islands’ 20-year economic strategy in a virtual presentation on Tuesday, outlining broad aspirational and macroeconomic goals that it hopes will pave the way to a more sustainable and prosperous future.

Vision 2040, as the completed 283-page federally funded plan is known, is the result of four months of surveys, town halls, interactive open houses and targeted outreach that gathered input from residents, business owners and the USVI diaspora about what they believe the territory needs to thrive into the future. In all, some 3,000 people contributed their thoughts and ideas to the final report, while thousands more were engaged through social media and visits to the website.

According to Dan Gundersen, principal and senior vice president at Camoin 310, the national economic development firm selected to oversee the project, the bottom line is that the USVI will need to add 1,093 net new jobs annually over the next 10 years to bring unemployment down to 4 percent from the current 10 percent and change the trajectory of its economy.

“This translates to an investment [measured by Gross Domestic Product] of $113.8 million per year for the next 10 years [$1.1 billion in total] and annual economic growth of between 2 to 3 percent,” according to the report’s executive summary.

Gundersen was joined for Tuesday’s presentation by EDA CEO Wayne Biggs and Shanell Petersen, the authority’s managing director of marketing and Vision 2040, outlining how to move forward after multiple economic blows – the Great Recession of 2007-08, the Hovensa refinery closure in 2012, the twin Category 5 hurricanes of 2017 and now the COVID-19 pandemic – that have resulted in a loss of 8,700 jobs since 2007, or a net job loss of 19 percent, according to the executive summary.

The territory has not been able to bounce back from these catastrophes because it does not have a diversified economy, said Gundersen, with about 60 percent of the workforce relying on service-driven jobs in government, tourism and social services.

The key to an economic reversal – “recovery with resiliency” in Vision 2040 parlance – is reducing the cost of doing business in the USVI and embracing “industries of the future.” These include marine/maritime research; alternative and renewable energy; agribusiness, including aquaculture, hemp farming and specialty foods; professional tech services, including remote work, consulting and diaspora co-ventures; research and development, especially around climate change; health sciences such as telemedicine and medical simulation; and light manufacturing to include regional foods, co-manufacturing and resilient building materials.

When it comes to the territory’s mainstay – tourism – Vision 2040 proposes developing a V.I.-centric product that focuses on heritage, culture, sports, adventure and wellness, small conferences and casual-elegant lodging and dining, while still realizing the benefits of short-term cruise ship visitors.

However, achieving any of this will mean radically improving both the business climate and the infrastructure of the USVI, the report states.

In one Vision 2040 survey with nearly 500 respondents, “three out of four businesses [75 percent] expressed that they would have reservations about recommending the U.S. Virgin Islands to other businesses considering opening in or relocating to the territory. When asked to rank the business environment on a five-star rating [with five being best], 87 percent would not give the territory a four- or five-star rating,” according to the summary.

“Economic growth will not occur until these numbers are reversed,” it states, noting that interviews and focus groups with businesses “point to government attitudes, programs and policies as major contributors to a poor business climate. It is not a new phenomenon; in fact, it is a situation that was decades in the making.”

To reverse this trend, the Vision 2040 plan recommends the formation of a Business Climate Commission comprising private and public leaders, and an immediate call “for all government agencies to present the governor with at least three of the most substantive things they can do immediately within their agencies to be more responsive to the needs of businesses,” in addition to 115 already outlined in the report.

The plan also offers recommendations and goalposts for achieving energy resiliency that depends heavily on developing clean energy ventures and embracing alternative energy sources so that by 2040, V.I. Water and Power Authority rates “will be 10 percent or less than the average Caribbean rate … or no more than 2.5 times the U.S. average rate, whichever is less.”

Other areas addressed in the report include education, infrastructure, public safety and the physical environment, with recommendations ranging from curricula that encourage critical thinking and entrepreneurial interests, to roads built for the long term, to a territorywide recycling program and comprehensive land and water use plans for each island.

Now that the Vision 2040 plan is in hand, it is critical to keep the momentum going, said Biggs. While government agencies have short-term plans – whether one, five or 10 years – the key going forward will be to develop budgets and strategies that also align with the 20-year initiatives, he said.

The biggest obstacles to success? “Apathy and cynicism,” said Gundersen.

Boating in the V.I., Part 4: Pandemic Leads to Crowding at USVI Anchorages