Plans call for a larger stadium with facilities able to accommodate several sports, and for a permanent venue for the St. Croix Christmas Festival.

FEMA caused a temporary halt in construction operations last December because of concerns about flooding, but the letter approves changes that allow the project to move forward. A Conditional Letter of Map Revision is a letter from FEMA commenting on whether a proposed project, if built as proposed, or proposed hydrology changes would meet minimum National Flood Insurance Program standards.

The project has been in the works for nearly 20 years but has been delayed repeatedly.  Gov. John deJongh Jr. ordered it put back out to bid after concerns arose about one contractor. Gov. Kenneth Mapp then killed the new contract and started the process anew. Mapp ordered work to begin in 2017.

More than $18 million has been spent to date, producing plans and preparatory work but no buildings yet. 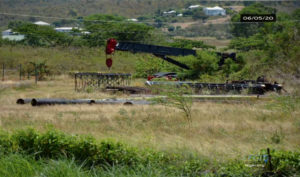 In June of 2020, the Senate Finance Committee saw a presentation showing the current status of the Paul E. Joseph Stadium, where millions have been expended for little visible progress. (Provided by the V.I. Legislature)Government House applied for the map revision in December. At that time, officials projected the project would start by May, but that date assumed the map revision would be approved more quickly.

In May, Bryan met with FEMA director Deanne Criswell to try to move the process along.
At the time, the project’s contractor, John Wessel of GEC LLC, told senators about some of the precautions already taken to combat geographical challenges from being partly on a flood plain.

“The precautions that are being taken are raising the playing field of the Paul E. Joseph Stadium to 10 feet above sea level, which is above flood elevation. In addition, the slab of the stadium itself will be 13 feet above sea level, which is three feet above the flood elevation,” Wessel said. “The area will be graded to drain and the cost associated with these increases of the elevation in both the playing field and the stadium itself have already been taken into consideration during the budgeting, and we anticipate no further changes to the budget due to the floodplain issues.”

According to Government House, FEMA’s approval clears the way for the rebuild of the stadium.

“Another hurdle has been cleared as we rebuild bigger and better in Frederiksted and across the Territory. This is yet another capital project that the Administration has moved from ‘proposed’ to ‘underway,” Bryan said in a statement heralding the news. “What is most exciting is that the transformation of Frederiksted is not just being talked about, but it is happening now, and residents can see the work in progress as we enhance the town as another cultural and recreational jewel to increase its prominence in our Tourism offerings to visitors.”

Bryan submitted legislation in January to allocate $8.2 million from remitted federal alcohol excise taxes on locally produced rum to support the completion of the long-delayed stadium project, which had been undergoing revisions and design changes since its inception during the second term of Governor Charles Turnbull.

According to Government House, these federal rum excise tax funds cleared the way for the project’s completion. However, while the project application was under review by FEMA, the federal agency requested additional information regarding portions of the project being located in a floodplain.

Work on the stadium renovation that had been underway was halted in August 2020 pending FEMA’s approval, which the Governor announced today.

Minor Charged as an Adult with Armed Carjacking, Robbery-Theft