What does the future hold for the Caneel Bay Resort, the iconic hotel built by Laurance Rockefeller in 1956?

That is the question more than 200 people tuned in to discuss during an online public meeting Tuesday night.

The resort lies within the boundaries of the Virgin Islands National Park and is now managed by CBI Acquisitions LLC, under a unique lease agreement known as a retained use estate.

That agreement expires in 2023, and the National Park Service has been working with its staff and the public to develop a plan for the 150-acre property which has largely lain in ruins since Hurricane Irma struck in 2017. In July 2021, the Park Service decided to put the property out for public bid in two years, in 2023.

No decisions were made at Tuesday’s meeting hosted by Virgin Islands National Park Superintendent Nigel Fields.

Instead, the meeting was designed to be a listening session and a call for community input. “What does the community think is appropriate?” Fields repeated throughout the session. “You tell us.”

The Park Service developed four possible plans to present at the meeting which are described in the Caneel Bay Redevelopment and Management Plan Newsletter on the NPS website.

In response to feedback following a similar meeting for community groups last week, the Park Service has extended the public comment period by two weeks.

Virgin Islands residents, visitors, and the general public now have until March 4 to respond to four alternative plans presented – and to suggest other possibilities. Comments may be made online at the same website linked above or by mail addressed to Superintendent, Virgin Island National Park, 1300 Cruz Bay Creek, St. John, VI 00830.

At Tuesday’s webinar, audience members were invited to type in questions about the four possible plans developed by the National Park Service.

Three of these proposals include leasing the property to a developer to construct and operate a resort. The fourth, referred to as the no-action alternative, allows the property to remain largely undeveloped. Details of the four plans are provided below.

After Hurricane Irma destroyed the resort in 2017, officials at the U.S. Department of the Interior, which oversees the National Park Service, assumed control of the decision-making regarding Caneel’s future.

More recently, however, the Interior Department has given the National Park Service the authority to develop a process for determining the resort’s future.

The final decision as to whether there will be commercial activity – and if so, what kind – will be made by the regional director, or the director of the National Park Service, by the end of 2022, Fields said.

If one of the three “action alternatives” to rebuild the resort is selected, the Park Service intends to send out requests for proposals in the winter of 2022. The submitted proposals will be evaluated by the summer of 2023. When the present lease with CBI Acquisitions expires in October 2023 and the selection process is completed, the chosen developer will work with the Park Service to refine the resort’s design and features for visitors.

The Park Service’s plan now sets construction to begin in the winter of 2024 with the goal of opening the resort in 2026 – assuming an action alternative is selected.

At this point, all three development alternatives could permit the resort operator to limit access to some or all of the seven beaches at Caneel.

Under the territory’s Open Shorelines Act, anyone approaching by water – including boaters, kayakers, and swimmers  – can access the beach, but hikers or beachgoers may be prevented from crossing the resort’s property to reach the shoreline.

The V.I. Open Shoreline Act of 1971 gives the public the right to access all shorelines in the territory from the water’s edge to 50 feet from mean low tide, under most circumstances.

In past decades, Caneel’s operators have allowed the public to use the beaches, although only registered guests could sit on the lounge chairs or use water sports equipment. The public was permitted to cross the property to access hiking trails, dine in some restaurants, and join hotel guests on the tennis courts. Over the years, however, public access has become increasingly limited.

It is unclear at this point what degree of access the resort developer or operator will grant to the public under the present proposed alternatives.

At Tuesday’s meeting, Fields said the public should address this question in their comments.

During the meeting, Gordy Kito, a leasing specialist with the Park Service, said that once the retained use estate agreement expires, there are no restrictions on the number of units built, their density, the height of the structures, or any other features of a future resort.

During the meetings held last spring, members of the public presented a long list of desired features for a future resort, including making it a model of sustainable building and operating practices, establishing a partnership with the University of the Virgin Islands for training opportunities, offering entrepreneurial opportunities for Virgin Islanders, and constructing a community education and performance center.

The “Caneel Bay Redevelopment and Management Plan Newsletter” on the Parks Service website details four alternatives, three of which, labeled, A, B and C, involve development, while the fourth is simply doing nothing.

In Alternative A, “Caneel Bay Beach, Scott Beach, Paradise Beach, and Turtle Point Beach would be designated for resort guest use and guest services would be the responsibility of the resort developer/operator at these beaches.”

Honeymoon and Hawksnest Beaches would be public and would allow food and drink vending, water sports rentals, and public restrooms and showers.

The Park Service would award a developer a separate concession to operate moderately-priced units for overnight guests at Hawksnest Beach. Alternatives B and C would not have this.

In this scenario, the park service would give what it describes as “an interpretive experience for visitors at sites such as the Sugar Mill ruins and other known archaeological resources.” Options B and C would not have this.

Scott Bay cottages would be removed or redesigned. 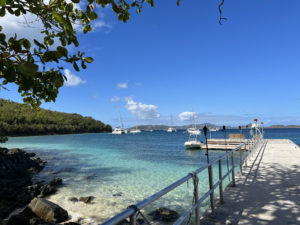 Alternative B eliminates the moderately priced resort at Hawksnest and instead expands the main resort area.

The Park could still provide a community space for a cultural center and construct a maintenance area to allow a transportation hub in Cruz Bay.

Alternative C has the least public access, with Hawksnest and Honeymoon beaches as part of the private resort.

The Park Service would not build a new maintenance and transportation facility and would keep its maintenance operation in Cruz Bay.

The no-action alternative leaves historic structures in place and preserves the buildings’ form and outlines.

According to the newsletter, “Potential removal of portions of isolated or compromised twentieth-century architectural features will occur.”

No new moorings are planned under any of the alternatives.

At Tuesday’s meeting, Fields said the park may decide at some future date to construct shade shelters or bathrooms, funded by recreational use fees. But he declined to discuss whether smaller developments, such as restaurants or watersports rental shops might be constructed.

The no-action alternative raises some important questions, according to David DiGiacomo, who initiated a legal action that resulted in the discovery of hazardous waste contamination at several sites on the property.

One concern is the cost of removing the hazardous materials, some of which may be borne by the developer/operator. In addition, systems for water distribution, waste disposal, and energy production might need to be completely rebuilt.

The costs of rebuilding may end up amounting to $100 million or even $200 million, which could lead a developer to seek to construct hundreds of overnight units to get a return on his investment.

At the time Caneel was built, there were few accommodations on St. John other than a National Park campground and a few guesthouses. Tourists seeking luxury accommodation had only one choice: Caneel Bay, which catered to all of their needs, including upscale restaurants, watersports, and spa services. Now, however, there are hundreds of villa rentals available on St. John at all price ranges and levels of luxury. Service providers like chefs and massage therapists who come directly to villas are now mainstream.

The economic benefit that Caneel provided in the past may have been replaced and may now be more widely distributed. Given St. John’s thriving villa industry, DiGiacomo asks, is a luxury resort even desirable?

Furthermore, he suggested, if the Park Service and the public choose the no-action alternative, it gives the park the opportunity to further explore the archaeological sites yet undiscovered, including remnants of Taino civilization that might otherwise be disturbed in the frenzy of reconstruction.

At Tuesday’s meeting, numerous questions were raised regarding the protection of natural and cultural resources, the funding of the resort, the cleanup of hazardous materials, and access to trails and beaches.

“Turn your questions into statements,” said Fields. “We want to hear from as many people as possible for something that will have implications for generations to come.”